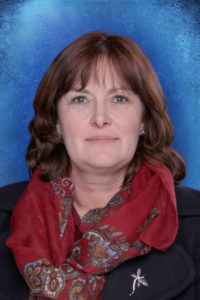 Her career started at Springs Boys' High in 1987 teaching Geography to our learners.

She was a “girl in green”, having matriculated at our sister school, Springs Girls’ High.

Mr Claude Mullan (1940 - 1960)
He led the school from its official opening, through the difficult time of the second world war, the post-war period and into the fifties when the girls moved to the new Springs Girls' High School premises.  This school then became a monastic school for boys only.  They "old" school hall was named after Mr Mullan.

Mr Harold Marston (1961 - 1975)
He served for approximately fourteen years and the main quadrangle was named after him.

Mr Jaap Liebenberg (1975 - 1981)
During this time the school pavilion was built, which bears his name.

Mr Bob Gouldie (1982 - 1993)
The "new" school hall is proudly names after this remarkable educator: he attended Boys' High as a pupil; was the Head Boy in his matric year; taught his alma mater and was later appointed Headmaster.

Mr André French (1994 - 2016)
Building on the achievements of his predecessors.  The school swimming pool, proudly bears Mr French's name, was built in this time.